On Thursday, October 20th, Becky’s Warriors hosted our first-ever Spike Out Cancer event with the Marian Catholic Women’s volleyball teams and it was a wonderful event. The girls squared off against the Benet Redwings for two exciting sets!

Several Becky’s Warriors board members joined staff, students, and faculty of both schools to help raise funds for Becky’s Warriors. While the outcome wasn’t what Spartan fans were hoping for, we were all encouraged and grateful for the support both teams and schools showed us. We also had a humbling opportunity to highlight cancer survivors and current fighters as well as recognize those who fought valiantly against cancer. 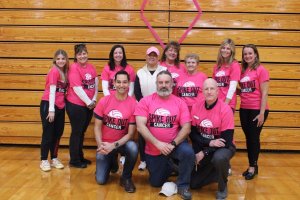 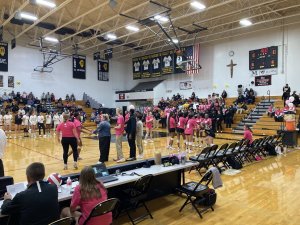 Combining the proceeds from the Men’s volleyball Spike Out Cancer event earlier in the year, we raised over $3,000 to help Marian Catholic families that are fighting cancer battles. Thanks to all attendees and those that helped especially Coach Hannah Krydynski, President Vince Krydynski, Linda Hansen and her team of bakers, and Principal Steve Tortorello!

A Day of Thanks and a Day of Giving

Amazingly, in a few short days, many of us will be sitting down with family and friends to enjoy the time-honored tradition of Thanksgiving Dinner. Turkey, stuffing, potatoes (are you a traditional Yukon gold fan or slightly more adventurous with sweet potatoes?), cranberry sauce, and pumpkin pies will adorn tables across the country. We’ll recognize that we are tremendously blessed with love from God as well as family and friends.

GivingTuesday is a global generosity movement unleashing the power of radical generosity. GivingTuesday was created in 2012 as a simple idea: a day that encourages people to do good. Since then, it has grown into a year-round global movement that inspires hundreds of millions of people to give, collaborate, and celebrate generosity.

As we move into the holiday season and with Giving Tuesday as a backdrop, please consider supporting Becky’s Warriors.

Thank you in advance for considering Becky’s Warriors.

Becky’s Warriors was organized to help the greater Marian Catholic community and specifically those individuals that are going through a cancer battle. We did this to honor our friend Becky Eaton Lopez, MCHS ‘95, who courageously fought breast cancer.

We’ve used a saying of hers – “Prayers and Swears” – on a fairly regular basis; when we know of someone currently fighting or recently lost their battle to cancer, we ask for your prayers and swears.

There are several Warriors and their families that could use your prayers (and a few swears if you wish):

Thank you for your continued support of Becky’s Warriors. We exist thanks to your support and we are grateful that you are on this journey with us. We wish you a Happy Thanksgiving and pray for your health and well-being this holiday season!